“The children are the world’s most valuable resource and its best hope for the future” Lapu-Lapu City Mayor Junard “Ahong” Chan quoted the late US President John F. Kennedy during his State of the Children’s Report last November 4 2019 at Hoops Dome, Lapu-Lapu City.

Earlier this month, LLC’s newly-elected mayor had delivered his first 100 days report to the people of Lapu-Lapu and he was back again on the same stage to give his state of the children’s report with the firm belief that every child has the right to know the state of the city as regards to children’s agenda. Mayor Chan believes that the young Oponganons have equal importance like everyone else in the City.

Just 4 months in the office as the newly elected and 1st time Mayor of Lapu-Lapu City, Mayor Chan stated that it was his distinct honor to present to his constituents the significant gains the city has in advancing the cause of the children.

Under the Chan administration, students who got nowhere to go for their research projects may now avail of the free services offered by the city’s e-library which was opened to the public last October 9. Students can now utilize the said facility for research and any other school-related purposes for free. With its success, another e-library will soon be set up on the island of Olango as well as on every barangay so students can have plenty of options to go study and do their research without any cost.

Lapu-Lapu City will also be opening a call center academy wherein senior high graduates who opt not to enroll in college and instead choose to fend for their families can work in various Business Processing Outsource (BPO) companies in the city. They will undergo necessary training with BPO partners. Interested individuals may now inquire from the Lapu-Lapu City Public Employment Services Office (PESO).

Another very helpful initiative of the Chan administration is to sponsor plane tickets for students who will be competing in the International Robotics Competition in Greece as well as those competing in the Palarong Pinoy in Palawan. Financial and logistical support will also be provided for the city’s delegates to the CVIRAA as well as to other athletes competing in various regional and national sporting competitions.

Mayor Chan also proudly enumerated some of the accomplishments the city has made in such a short period of time such as the intensified dengue and polio awareness drive among the students. In response to the alarming rate of dengue and polio cases in the country, Lapu-Lapu City under the Chan administration has partnered with the Lapu-Lapu City Youth Development Council and the SK Federation in the facilitation of various seminars and fora to educate the students on the ill-effects of both diseases.

The Chan administration has also provided various assistance ranging from shelter, financial assistance, psychological evaluation, counseling, therapy and case filing to children in conflict with the law, abandoned and neglected children, children who fell victims of human trafficking and illegal recruitment, as well those who were physically and sexually abused and exploited. Since July 1 until the present, the city has rescued 29 children in conflict with the law; 24 children who were physically abused; 4 children who were sexually exploited; 2 abandoned children; 9 neglected children; and 2 victims of human trafficking.

The current administration also endeavors to convert the Lapu-Lapu City College in to a State College to ensure bigger subsidy from the national government that would capacitate the institution to expand its program and accommodate more students who wish to avail quality and affordable college education, and in line with Mayor Chan’s desire to give the students access to tertiary education, his administration will provide scholarship to those deserving senior high graduates who wish to pursue higher education. and also extend cash incentive as a reward to academic achievers.

Another option for students who wish to avail of free education through scholarship is by training them to become members of the marching band and the Rondalia. The local government will offer free training on the use of musical instruments for the students to qualify for the band. One noteworthy story of a band member who made it big is that of Atty. Richard “Dick” Sison, a son of a market vendor who eventually becomes a lawyer through a scholarship by just being a member of a marching band.

Mayor Chan is also responsive to the predicament of the students. Just recently, he made headlines when he personally appealed to the bridge board to lift the ban which barred pedestrians including the students from crossing the bridge by foot. Due to his prompt intervention, the ban was immediately lifted thus helping the plight of students who chose to walk their way to school to save on the fare.

Mayor Chan’s administration also supported the programs of the Department of Education by extending financial support to ensure the success of the UNO activity and supporting the Lapu-Lapu City Division Fiesta of Talents. Mayor Chan assured DepEd of his unequivocal support in all their undertakings to advance the welfare of students. His administration is likewise committed to support trainings for capacity advancement of the city’s educators.

Lapu-Lapu City and Citicore have also inked a deal just last month to build a water desalination plant that would help address the water shortage in the city. The construction of the facility is already scheduled to start next month. In line with this, an inventory of schools with no drinking water will also be conducted so the city government can find ways to provide them with free drinking fountains.

In order to keep the City safe for the children, the Chan administration has intensified street patrolling and have rounded up bad elements from city streets. In fact, just recently, 4 rape suspects who gang-raped a 16-year-old girl were arrested in less than 24 hours through the immediate action of Mayor Chan who instructed the PNP to hunt down the culprits and justice was served to the victim. Mayor Chan assures everyone, that as mayor, he is very accessible and can be contacted anytime.

The authorities were also able to put behind bars several drug personalities and continue to monitor the communities and to prevent those who-would-be-pushers from operating. Mayor Chan also gave marching orders to the city engineering department to have all our streets and city corners lighted to help deter criminality.

To help curb crime and divert the attention of the children from the temptation of illegal drug use, the Chan administration likewise initiates sporting activities. The Lapu-Lapu City Government will a free summer sports clinic for basketball, volleyball, lawn tennis, table tennis, soccer, karate, chess, and boxing through Lapu-Lapu City Sports Commission. Another way to divert the attention of the young from social ills is to hone their talents. Under Mayor Chan’s administration, the city will create an artist circle that will help cultivate the talent of aspiring artists wherein free training on dancing, singing, and the likes are offered.

To ensure a healthy citizenry, the Lapu-Lapu City government also embarks on a regular Libreng Serbisyo caravan which brings health services closer to the people in the barangay. Statistics would show that more than half of the patients in the caravan are children. While waiting for their turn for consultation, children are given biscuits and refreshments to wind their time. Feeding programs to daycare children is also provided. Likewise, to help our PWD children particularly those under the care of STAC, the Chan administration commits to re-instate the free therapy sessions to help alleviate the physical condition of these children.

To ensure a safe environment for the children, the city council passed a City Ordinance banning the use of single-use plastics and plastic drinking straws. Likewise, no segregation no collection policy as regards to garbage collection is also strictly implemented as a way of helping reduce carbon footprint in the ecosystem. To free the shoreline from pollutants, especially that much of the city’s economy is dependent on its waters, the administration will also prioritize decent housing provision to the informal settlers living on the shoreline. Mayor Chan will also ask the city council to pass an ordinance requiring hotels and resorts to provide recyclable tumblers to their tenants and guests and likewise require them to provide refilling stations within their premises to discourage patronage of bottled water. Judging from the success of this experiment, his administration will replicate this on a city-wide scale implementation.

On the appeal to protect children’s rights to preserve its dignity and self-worth, Mayor Chan ordered a revamp of the manpower complement of our City’s Home Care facility after hearing complaints of abuse and neglect from among the rescued children perpetuated by those who were supposed to give them care. We acted right away after hearing the report because I want to ensure that the needs of rescued children who are sheltered in our City’s home care are promptly provided and that they are attended to by competent personnel.

The same thing applies on the appeal to protect and defend children from false propaganda and fake news. Lapu-Lapu City Government under the Chan administration abhors any form of misinformation. Cognizant of the big role social media plays in today’s age and time, the city’s IT department in City Hall runs and operates the City’s official facebook page 24/7 with the sole purpose of bringing factual news to the Oponganons for them to get the facts straight, where it happens when it happens. This is also a way to convey to the constituents what the Chan administration has been doing to help improve their lives.

“As your Mayor, and the father of this City, let me assure each and every one of you that we will not let anyone steal the gallantry of our forebears who fought victoriously for our freedom. We will not allow anyone or any institution to rewrite history and deflect our ancestors’ heroism to oblivion. As sons and daughters of Datu Lapu-Lapu, we will stand to protect his place in history. Come April 2021, Lapu-Lapu city will take center stage as the whole nation commemorates the victory of Datu Lapu-Lapu and his men in the famous battle of Mactan. Let us extol his bravery and heroism by uniting towards a common enemy of poverty, injustice, and social ills,” Mayor Chan promised to his people,

“I will strive to make Lapu-Lapu City a haven for children where they can grow freely surrounded by the nurturing environment of peace, love, and security. After all, by the words of Nelson Mandela, “History will judge us by the difference we make in the everyday lives of children. For as long as I am Mayor, I commit my unwavering support to the children, either students or out of school youth, in their quest to bring pride to our City.” He added. 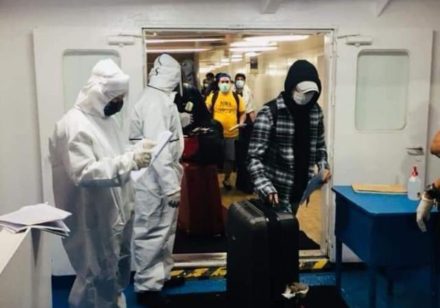 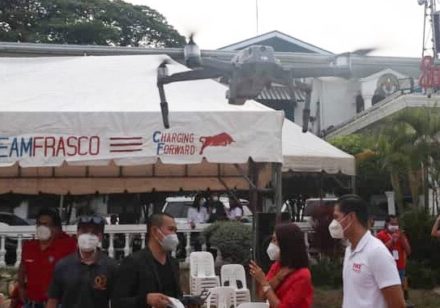 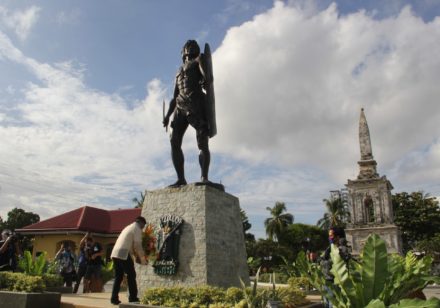 Mayor Chan Faces Lapu-Lapu on Behalf of the Filipino Nation